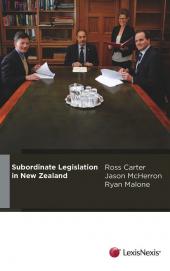 Ross Carter LLB (Hons) joined the Parliamentary Counsel Office in 1998 and has considerable experience drafting Government Bills and secondary legislation. Previously a legal researcher at the New Zealand Law Commission, he has also been an adjunct lecturer in legislation at Victoria University and a private secretary to the Attorney-General. Ross is a member of, and the Secretary of, the Commonwealth Association of Legislative Counsel, and has written articles and presented conference papers on legislative drafting and statutory interpretation. He is the co-author of Subordinate Legislation in New Zealand with Jason McHerron and Ryan Malone and Statute Law in New Zealand (4th ed, 2009) with Emeritus Professor John Burrows ONZM, QC.

View all books by Ross Carter (4)

View all books by J McHerron (1)

View all books by R Malone (1)