The New Zealand Procedure Manual: District Courts is designed to provide the busy practitioner with a single volume guide to bringing a civil case in the District Courts. 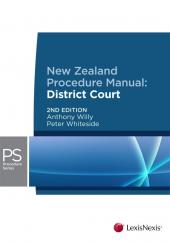 A bonus feature is the attached CD-ROM of all the District Courts Forms under Schedule 1 which will help the busy practitioner by speeding up the preparation of court forms.

The New Zealand Procedure Series is a series comprising books related to procedure in the New Zealand courts and is aimed at providing practical and accessible assistance to practitioners.

View all books by Anthony Willy (1)

View all books by Peter Whiteside (1)