This book marks the 10th anniversary of the establishment of the New Zealand Supreme Court. 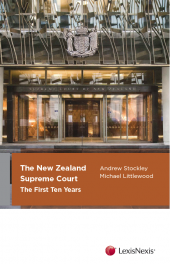 This book marks the 10th anniversary of the establishment of the New Zealand Supreme Court. It considers how the Supreme Court has been performing; the extent to which it has met its original objectives; and what trends and characteristics can be discerned from its first decade in existence. The first part of the book outlines the establishment, role and functioning of the court. The second part addresses the emerging jurisprudence of the court in the most important areas of New Zealand law. The authors include many of New Zealand's most distinguished legal scholars and other contributors with detailed knowledge of the workings of the Supreme Court.

View all books by Andrew Stockley (1)

View all books by Michael Littlewood (1)