A comprehensive discussion and analysis of the principles of company law in New Zealand.

Company Law in New Zealand provides a comprehensive discussion and analysis of the principles of company law in NZ. The work covers all aspects of the law relating to companies from the fundamentals of company law and the operation of the company's business through to formal insolvency.

Key changes for the second edition include the addition of current case law (affecting most chapters); expanded discussion of administration during Insolvency proceedings; and discussion of the amendments to the Companies Act 1993 and Limited Partnerships Act 2008 that came into force in 2014 and their subsequent impact on business operations and directors' duties.

With the first edition being cited numerous times in the Supreme Court, Courts of Appeal and High Court of New Zealand Company Law in New Zealand is an invaluable resource for all practitioners and students of company law.

Neil Campbell is a barrister at Shortland Chambers, Auckland. He was previously an Associate Professor in the Faculty of Law at the University of Auckland, and prior to that taught at the University of Nottingham.
His practice, teaching, and research are focused on contract law, insurance law, company law, securities regulation, and land law. He has been published extensively in a range of leading texts and peer-reviewed publications. These include: Hinde McMorland and Sim Land Law in New Zealand, Morison's Company and Securities Law, the Cambridge Law Journal, Lloyd's Maritime and Commercial Law Quarterly, the Insurance Law Journal, and the New Zealand Law Review.

View all books by Neil Campbell (4)

Christopher Hare is the Travers Smith Associate Professor of Corporate and Commercial Law at the University of Oxford and a Tutorial Fellow of Somerville College. He was an undergraduate at Trinity College, Cambridge and read for an LLM at Harvard Law School and the Bachelor of Civil Law (BCL) at Brasenose College, Oxford. He practised as a barrister for several years at 3 Verulam Buildings, Gray's Inn, specialising in banking and commercial law, before taking up a fellowship at Jesus College, Cambridge and then spending seven years in New Zealand as Senior Lecturer in the Law Faculty, The University of Auckland. His research and teaching focus is on banking law, company and commercial law and the law of obligations generally.

As well as co-authoring Company Law in New Zealand, he is the editor of Ellinger's Modern Banking Law (OUP, 2011) and a contributor to Paget's Law of Banking (LexisNexis, 2014).

View all books by Christopher Hare (1) 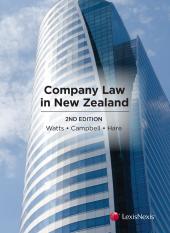 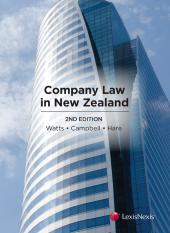