Questions and Answers Criminal Law 4th edition enables students to consolidate their understanding of criminal law by guiding them through a series of questions to help them build upon their existing knowledge and recognise more complex issues. 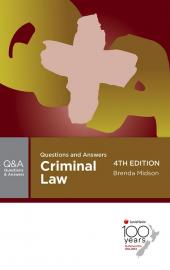 Key areas of study are summarised; a suggested solution is provided for each question and common pitfalls when answering questions are identified.

Brenda Midson (BA in English, LLB and MJur (Dist)) is a Senior Lecturer in Law at the University of Waikato. She is also the General Editor of the New Zealand Law Journal. Brenda's expertise is in evidence, criminal law, and criminology, and her research interests predominantly include evidentiary and criminal law reform, particularly in relation to culpable homicide, sexual assault, youth crime, and children's rights and welfare. Brenda has produced a number of publications on topics including child homicide, the culpability of young killers, victims of violence who kill their abusers, evidentiary issues in sexual cases, as well as texts in evidence and criminal law.

View all books by Brenda Midson (4)