Electoral Law in New Zealand: Practice and Policy by Andrew Geddis is the only comprehensive review of the New Zealand electoral system written from a legal perspective. 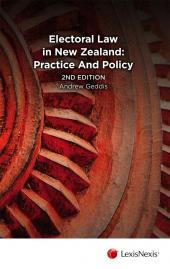 Electoral Law in New Zealand: Practice and Policy not only sets out the legal rules that apply to elections but also explains why they are that way in straightforward manner. Written by New Zealand's foremost expert on the topic, Election Law in New Zealand is accessible reading for both the legally trained and lay reader and has been recognized as an authoritative source by both the High Court and the Court of Appeal.

This second edition updates developments since 2007 including:

In addition, responding to feedback from the first edition, the author has added a discussion of the issue of electronic voting and a new section on the issue of referenda.

The Electoral Commission of New Zealand awarded the first edition of the text its Wallace Award for best textbook, article or monograph on electoral matters.

Professor Andrew Geddis, from the University of Otago's Law Faculty, is the leading researcher and commentator on electoral law in New Zealand. He was selected to chair a review of aspects of the electoral law in the last term of the Clark government and has written reports and numerous articles on the transparency of New Zealand election campaign funding, as well as on number of other public law related topics. Andrew is also a member of the Legislation advisory Committee and on several occasions has provided to the Justice and Electoral and Privileges select committees. He is regular conference speaker as well as a contributor to Pundit: http://pundit.co.nz/blogs/andrew-geddis - often cited by political and legal journalists.