This title remains an accessible and portable reference point for the legislation required by students of criminal law, and practitioners working in criminal law.

Consolidated and reviewed annually for your convenience, this 24th edition is current as at 26 August 2019 and continues to be the perfect tool for practise or study. 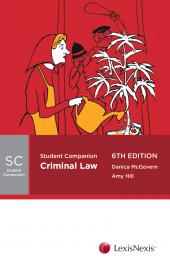