Burrows, Finn and Todd on the Law of Contract in New Zealand, 6th edition (eBook)

Definitive and comprehensive coverage of contract law in New Zealand 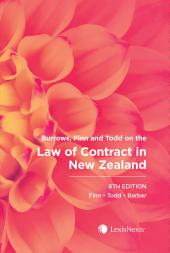 Law of Contract in New Zealand, written by John Burrows, Jeremy Finn and Stephen Todd, was first published in 1997. This 6th edition sees for the first time a change in authorship, being written by Jeremy Finn, Stephen Todd and Matthew Barber. As always, it provides definitive coverage of the law of contract in New Zealand. The comprehensiveness, depth of analysis and coverage and clarity of the discussion ensures that this is the first point of reference for the legal practitioner, law student and all those interested in this important field of law.

This new edition comes nearly two years after the publication of the 5th edition. The main driver for its early arrival is the enactment of the Contract and Commercial Law Act 2017, the purpose of which is stated in section 3 as being "to re-enact, in an up-to-date and accessible form, certain legislation relating to (a) contracts; and (b) the sale of goods; and (c) electronic transactions; and (d) the carriage of goods; and (e) various other commercial matters, including mercantile agents and bills of lading". The passing of this omnibus statute has necessitated much significant rewriting and updating of the text throughout major parts of the book.

Furthermore, and quite apart from the 2017 Act, the 6th edition discusses many significant developments in the cases since the last edition. The various topics which contain new and substantial material include, in particular, contract formation, performance of existing contractual duties as consideration, terms implied in fact, electronic signatures, contractual mistake, non est factum, rectification of contracts, illegal contracts, recovery of damages by a contracting party in respect of a third party's loss, mitigation of damage, the scope of a contracting party's duty and the cause of loss, and the ambit of the doctrine of penalties.​

Jeremy Finn has recently retired from the School of Law at Canterbury where he had taught since 1978. He has published widely in the law of contract, legal history, criminal law and criminal procedure, and the law relating to natural disasters.

View all books by Jeremy Finn (2)

View all books by Stephen Todd (2)

Matthew Barber BCom, LLB(Hons), LLM(Hons), PhD(Canterbury) is a senior lecturer in law at the University of Canterbury. He currently teaches contract law and commercial (particularly sales and consumer) law subjects in the law school, as well as teaching business law to postgraduate business students. He has published widely in the areas of contract and commercial law, is the co-author of the leading New Zealand contract law text and a contributing author to the Commercial Law in New Zealand online service. He is admitted as a barrister and solicitor in New Zealand.

View all books by Matthew Barber (3)